A 57-year-old female presents to your family medicine clinic for the first time after being told her calcium levels were elevated (2.78 mmol/L) at a recent emergency room visit for a migraine headache. No other abnormalities were noted on her complete blood count, electrolytes, and renal function tests at the time. She is known for migraines, osteoarthritis, hypertension, and dyslipidemia. Her medications are atorvastatin 20 mg PO DIE and amlodipine 5 mg PO DIE. On history, she describes feeling well at the time of her visit and denies having any family members with calcium abnormalities. She reports occasional bilateral knee pain, which she attributes to her osteoarthritis. Her vital signs are stable and her physical exam is unremarkable.

Among the following, which would you send as part of your initial investigations for this patient?

B. Initial investigations for hypercalcemia should include a repeat total and ionized calcium to confirm the diagnosis of hypercalcemia. Albumin level should also be ordered since abnormally low albumin levels may affect the total serum calcium level measured. Most physicians will also order extended electrolytes, renal function tests, and a complete blood count. One of the most important initial investigations is the serum PTH level as depending on whether it is normal/high or low, the differential diagnoses are very different. If the PTH is low, PTHrP (D), SPEP (A), and a chest radiograph (E) may be sent as part of a malignancy workup. If the PTH is normal or high, a 24-hour urine collection for calcium and creatinine (C) is often ordered to assess for familial hypocalciuric hypercalcemia (FHH). However, these would not be done prior to ordering a PTH.

During history taking of a patient with hypercalcemia, the focus should be on eliciting the signs and symptoms of hypercalcemia as well as its possible etiologies. The clinical manifestations of hypercalcemia can be remembered by the mnemonic “stones, bones, abdominal moans, and psychic groans”, which refers to its renal, skeletal, gastrointestinal, and neuromuscular manifestations. Psychiatric and cardiovascular manifestations can also occur. These are detailed in Table 1. It is important to remember that patients with mild hypercalcemia, defined as values not exceeding 0.25 mmol/L above normal range or <3 mmol/L, may be asymptomatic (1-3).

Hypercalcemia is defined as a serum calcium greater than two standard deviations above the normal mean in a reference laboratory. Hypercalcemia should be confirmed with repeat measurements of ionized calcium and total calcium. However, it is important to account for biologic and analytic variation when interpreting repeat measurements to determine if one value is truly different from the other and if a value is significantly elevated (4). Although the reference values can vary depending on the laboratory, normal total calcium generally ranges between 2.15-2.60 mmol/L and ionized calcium usually ranges between 1.17-1.33 mmol/L (1). Low albumin levels may also affect total serum calcium level (1). However, the single most important investigation for hypercalcemia is the PTH level. Hence, we will divide the different diagnoses for hypercalcemia depending on if the PTH is normal or high (PTH-dependent hypercalcemia) or if the PTH is low (PTH-independent hypercalcemia). Although the causes of hypercalcemia are numerous, 90% of all cases of hypercalcemia result from primary hyperparathyroidism or malignancy (1).

Primary hyperparathyroidism can be distinguished from familial hypocalciuric hypercalcemia (FHH) by performing a 24-hour urine collection for calcium and creatinine. FHH is associated with a low calcium to creatinine clearance ratio (<0.01) whereas primary hyperparathyroidism would lead to a high ratio (>0.02). For practical purposes, urinary calcium to creatinine ratio or calcium concentration in a spot urine sample is often used for the initial evaluation of calciuria. If clinically indicated, calciuria can be confirmed with a 24-hour urine collection. FHH is an autosomal dominant condition caused by a calcium-sensing receptor gene mutation. It is important to distinguish between FHH and primary hyperparathyroidism as the management differs significantly. For example, parathyroidectomy is not appropriate for FHH (5). However, FHH is rare and usually benign. Hence, when faced with PTH-dependent hypercalcemia in clinical practice, physicians will often focus on ordering imaging studies of the parathyroid to assess for adenoma rather than the 24-hour urine collection.

Moreover, primary hyperparathyroidism may be a presentation of multiple endocrine neoplasia type 1 (MEN 1) syndrome, where parathyroid hyperplasia or adenoma occurs with pituitary and pancreatic islet tumors. It is also associated with MEN 2A syndrome, which is characterized by medullary thyroid carcinoma, pheochromocytoma, and parathyroid hyperplasia or adenoma. Hence, it is important to inquire about these associated conditions in such patients as well as perform a thorough family history. As these syndromes are hereditary, genetic testing is usually performed if there is a high clinical suspicion (5).

Other causes of PTH-dependent hypercalcemia include tertiary hyperparathyroidism. It occurs in patients with end-stage renal disease resulting in prolonged secondary hyperparathyroidism, high phosphate, and low vitamin D. Over time, this leads to autonomous PTH secretion unresponsive to plasma calcium levels. The drug lithium can also cause PTH-dependent hypercalcemia, which may be reversed if the drug is discontinued (3).

Malignancy: Malignancy is a common etiology of hypercalcemia and can result from various mechanisms: osteolysis from metastases, excess PTH-related peptide (PTHrP), excess calcitriol production, and multiple myeloma (6). Hence, many clinicians will pursue investigations to search for an occult malignancy in PTH-independent hypercalcemia. PTHrP, alkaline phosphatase, calcitriol, and multiple myeloma workup are usually included as part of the laboratory investigations. In terms of imaging, a mammogram, chest radiograph, and abdominal CT are often done (2).

Osteolysis from metastasis: Bone metastases resulting in extensive osteolysis can result in hypercalcemia. The most frequently associated malignancies are multiple myeloma and breast cancer. A clue to this etiology of malignancy-associated hypercalcemia is a high alkaline phosphatase level. Lytic lesions may also be seen on imaging (3).

Excess PTHrP: Some solid tumors secrete PTHrP. Although PTH is suppressed, PTHrP acts similarly to PTH by increasing bone resorption and calcium reabsorption in the kidney. It is most commonly associated with squamous cell carcinomas of the lung, head and neck, esophagus, skin, or cervix, and carcinomas of the breast, kidney, prostate, and bladder (7).

Multiple myeloma: Multiple myeloma can also result in hypercalcemia due to bone lysis. It can be suspected if there is presence of other typical signs and symptoms of the disease: anemia, renal insufficiency, and bone pain. Serum and urine protein electrophoresis and serum free light chains are commonly ordered to investigate for multiple myeloma. Lytic lesions in the bone may also be seen on skeletal survey (8).

Drugs: Thiazide diuretics are a common cause of drug-related hypercalcemia as they increase renal reabsorption of calcium. Around 8% of patients taking thiazides develop hypercalcemia (11). Moreover, ingestion of large amounts of calcium or calcium-containing antacids may result in milk-alkali syndrome, which is characterized by hypercalcemia, alkalosis, and renal failure (5). Excessive ingestion of Vitamin A and Vitamin D may also lead to hypercalcemia. Vitamin A is thought to stimulate osteoclastic resorption and inhibit osteoblastic formation (1).

The management of hypercalcemia will depend on the underlying etiology. Mild hypercalcemia is defined as values not exceeding 0.25 mmol/L above normal range or <3 mmol/L (1). Most instances of mild hypercalcemia are from primary hyperparathyroidism. If it does not result in any symptoms (e.g., skeletal, renal, gastrointestinal, or neuromuscular), patients can usually be monitored without surgery (3). Indications for parathyroidectomy in primary hyperparathyroidism include overt clinical manifestations, calcium >0.25 mmol/L above normal, creatinine clearance <60 mL/min, low bone mineral density, history of fragility fracture, and age <50 years old (2). The management of hypercalcemia from other etiologies is beyond the scope of the current article.

Acute, severe hypercalcemia is defined as serum calcium greater than 3.5 mmol/L. However, indications for urgent treatment of hypercalcemia are more based on the clinical manifestations than the serum level. The mainstay of management consists of aggressive intravenous fluids and intravenous bisphosphonate. Calcitonin is sometimes used as a temporizing measure. Furosemide, glucocorticoids, and dialysis can also be indicated in some patients (2).

In rare cases, severe hypercalcemia may result in confusion and decreased level of consciousness. Airway management is crucial in the care of such patients. It may also result in hemodynamic instability requiring fluid resuscitation. Moreover, it can induce arrhythmias. Hence, these patients should undergo an electrocardiogram. Hemodialysis against a low or zero calcium dialysate should be considered in these potentially life-threatening cases when significant cardiovascular or neurologic dysfunction is present (1). 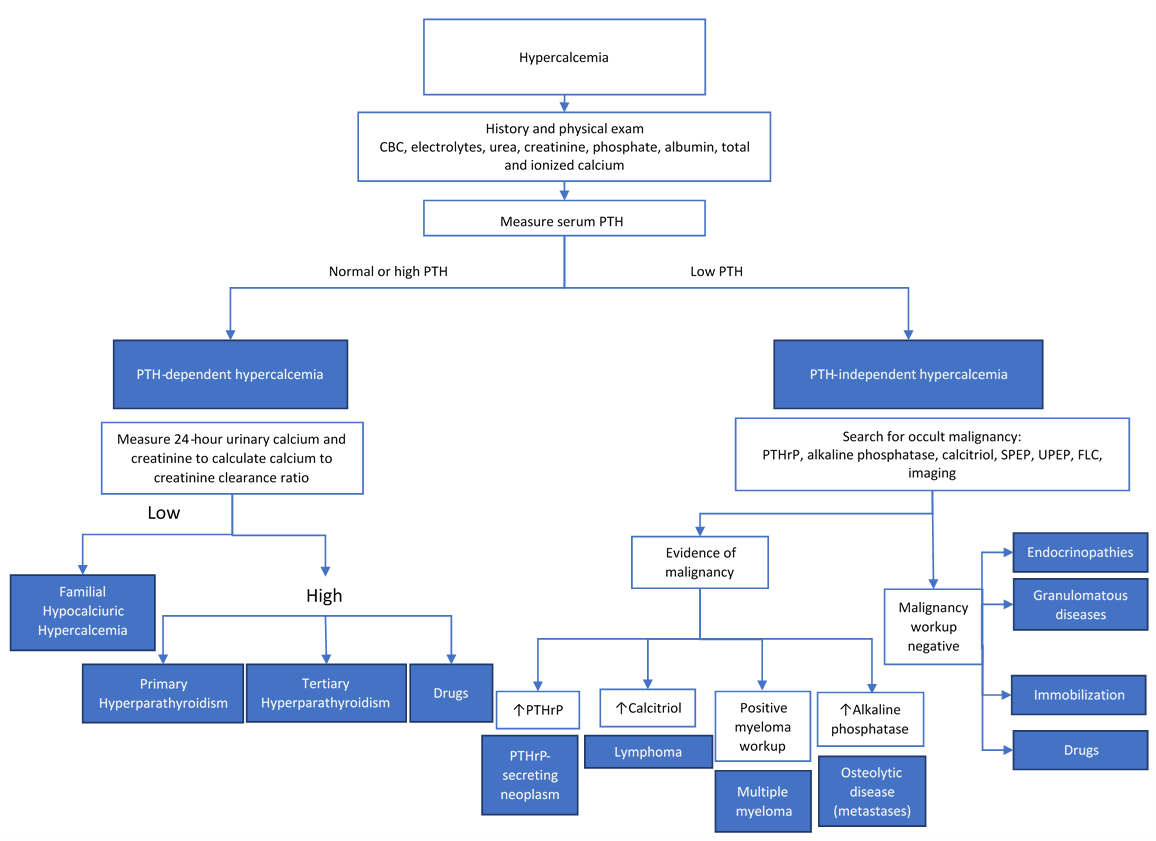