Hyperkalemia is one of the most common electrolytic disorders encountered in clinical practice. Serum potassium concentration is tightly regulated by cellular transfer via insulin, catecholamines, and acid-base equilibrium and secondarily by the kidney via aldosterone and renal flow. Severe hyperkalemia can result in dangerous and potentially life-threatening manifestations, mainly cardiac in nature. It is therefore crucial for physicians to be able to identify the causes of hyperkalemia and provide appropriate treatment. This approach article provides an overview of potassium homeostasis, diagnostic strategies, and treatment guidelines for patients with mild, moderate, and severe hyperkalemia.

A 72-year-old male presents to the emergency department with a three-hour history of nausea and generalized weakness. He is having difficulty walking and feels light-headed. The patient is known for congestive heart failure, hypertension, and type 2 diabetes mellitus for which he takes spironolactone, metoprolol, lisinopril, and metformin.

Vitals are as follows:

Labs are as follows:

An electrocardiogram (ECG) was performed which showed ventricular tachycardia at a rate of 132 with diffuse tall, peaked T waves with a shortened QT interval.

What is the best next step in management of this patient?

C.The patient has severe hyperkalemia (K = 6.9mmol/L) and requires urgent treatment. The patient has characteristic ECG changes (tall, peaked T waves with shortened QT), clinical manifestations (weakness, nausea), and a critical potassium serum level (>6.5mmol/L) which are each indications for urgent treatment. The patient should therefore be given calcium therapy, most commonly IV calcium gluconate, to antagonize membrane actions of hyperkalemia. A cation exchanger may also be given to help the body get rid of potassium. However, it is not the first step in management given its long onset of action and lack of direct cardiac protective effects (choice B). Though the patient is volume depleted and intravenous fluids may be indicated, the patient’s hyperkalemia is of more urgent importance and should be treated first (choice E). Furosemide may help the body excrete potassium but is not indicated as it would exacerbate the patient’s hypovolemia (choice D). Chest x-ray would not help in management of this patient’s hyperkalemia (choice A).

Potassium (K) is the body’s main intracellular ion. (1) 98% of potassium is found in the intracellular space and the remaining 2% is in the extracellular space. (2) The normal range of serum K is 3.5-5.0 mmol/L. Hyperkalemia is defined as a serum potassium concentration of >5-5.5 mmol/L. (3) The large potassium gradient is maintained by Na-K ATPase pumps that drive sodium out of cells and potassium into cells. (4) This electrochemical gradient sets the resting membrane potential (RMP) at -90mV, which determines the threshold for muscle contraction. In hyperkalemia, there is a greater concentration of potassium, a cation, outside the cell, resulting in a more positive RMP and a lower threshold for depolarization. This leads to difficulty in cell repolarization, which results in manifestations in excitable tissues such as the heart, skeletal muscle, and nervous system. (3, 5)

There are many potential causes of hyperkalemia which may be divided into three main categories.

Increased potassium intake may be due to overconsumption of potassium-rich foods, including potatoes, bananas, and avocados, or excessive amounts of potassium supplements or salt substitutes. (6) In healthy individuals, this is rarely the sole cause of hyperkalemia as the body is able to handle the potassium load by increasing potassium excretion. However, if there is underlying renal impairment such as in chronic kidney disease (CKD), the body may not be able to maintain potassium homeostasis and it may accumulate in the body. (7)

2) K shift into the extracellular space

Acute hyperkalemia may be due to redistribution of cellular potassium. (7) Shifting only 2% of the body’s potassium can result in the doubling of serum potassium concentration. (2) Insulin and catecholamines are major regulators in potassium shifting. Small rises in extracellular fluid potassium concentration triggers insulin release which stimulates Na-K ATPases to uptake potassium into cells. (7) Consequently, insulin deficiency as in type 1 diabetes mellitus is a common cause of hyperkalemia. (8) Similarly, epinephrine binding to beta-adrenergic receptors causes ATP conversion to cAMP, which acts on Na-K ATPases to uptake potassium. Beta-blockers prevent beta-adrenergic stimulation, leading to less potassium uptake, which may cause hyperkalemia in patients with comorbidities such as renal insufficiency. (2) In some types of acidosis, such as hyperchloremic normal anion gap metabolic acidosis, the high serum hydrogen concentration is compensated for by exchange of hydrogen for potassium via cell membrane transport, leading to potassium secretion into the extracellular space. (2) In addition to cellular shifts in potassium, cell breakdown, such as in rhabdomyolysis, results in release of potassium into the extracellular fluid and may cause hyperkalemia. (1)

While cellular shifts often cause transient hyperkalemia, impaired renal potassium excretion is the main cause of chronic elevations in potassium. (2) Potassium is freely filtered in the glomerulus and 70-80% is reabsorbed in the proximal tubule. Potassium excretion occurs at the level of the distal convoluted tubule and cortical collecting duct and is regulated by aldosterone. In hypoaldosteronism, such as in primary adrenal insufficiency, low aldosterone levels lead to low sodium absorption and low potassium excretion. Also, decreased distal urinary flow and reduced filtration, as in renal failure, leads to low levels of sodium reaching the collecting ducts and in turn low potassium excretion. (6) Drugs such as ACE-inhibitors (ACE-Is), angiotensin receptor blockers (ARBs), and non-steroidal anti-inflammatory drug (NSAIDs) may also cause hyperkalemia through their effects on the kidneys. ACE-Is and ARBs prevent angiotensin II formation and binding, respectively, which prevents angiotensin II’s stimulatory effect on aldosterone secretion, decreasing potassium excretion. (9) NSAIDs inhibit cyclooxygenase enzymes (COX-1 and COX-2), which convert arachidonic acid to prostacyclins, prostaglandins, and thromboxanes. (10) Prostacyclins, which are mediated by COX-2, increase potassium secretion at the distal convoluted tubule. Therefore, selective COX-2 inhibitors predispose a greater risk for hyperkalemia. (11). Additionally, potassium-sparing diuretics by definition cause the excretion of sodium and water in the urine while limiting potassium excretion, which may lead to hyperkalemia if overused. (12) There are two kinds of potassium-sparing diuretics that have distinct mechanisms of action. Aldosterone inhibitors, such as spironolactone and eplerenone, competitively bind to aldosterone receptors on the collecting duct and decrease the reabsorption of sodium and water, in turn decreasing potassium excretion. Sodium channel inhibitors, such as amiloride and triamterene, inhibit epithelial sodium channels (ENaC) in the distal tubule and collecting ducts, inhibiting sodium reabsorption and in turn potassium excretion. (12)

Evaluating a patient with hyperkalemia begins with ensuring a true increase in potassium. Pseudohyperkalemia is a term used to describe false elevations in potassium that do not reflect true serum potassium levels. (2) There are several mechanisms by which this can occur. The most common cause of pseudohyperkalemia is hemolysis from mechanical trauma, often secondary to difficult blood draws or the use of tourniquets. This causes rupture of erythrocytes and release of their contents, including potassium, in the serum. Potassium may also leak out of cells secondary to fist clenching, which is sometimes done during blood draws to make veins more prominent. In a minority of cases, pseudohyperkalemia may be due to platelet or white blood cell lysis which can occur in patients with thrombocytosis or leukocytosis as potassium leaks from platelet granules or leukocytes during coagulation. (4) Pseudohyperkalemia should be considered when there are no risk factors, manifestations, or apparent causes of hyperkalemia. Given that serum is the liquid part of blood obtained after coagulation, it may contain excess potassium secondary to lysis of damaged cells. Plasma, on the other hand, is the liquid part of blood after being treated with anticoagulants, which does not damage cells. Therefore, pseudohyperkalemia can be confirmed if the serum potassium concentration is at least 0.5mmol/L greater than the plasma potassium concentration. (2)

True hyperkalemia may require emergency treatment as it can be a life-threatening condition if not addressed promptly. (13) The urgency of treatment depends on clinical manifestations and the degree of potassium elevation. The main clinical signs and symptoms include muscle weakness or paralysis and cardiac manifestations such as characteristic ECG changes, conduction abnormalities, and arrythmias. Other symptoms may include nausea, vomiting, diarrhea, dizziness, and palpitations. (7)

It is crucial to obtain a focused history to determine the cause of hyperkalemia as it will affect patient management. Important factors to address on history include potassium intake, exercise, crush injury, and medical history including renal disease, diabetes, and adrenal disease. (1, 14) In addition, obtaining a complete medication list can help identify medications that predispose to hyperkalemia such as beta-blockers, ACE-Is, ARBs, NSAIDs, potassium-sparing diuretics, digoxin, and recent intravenous potassium. (1, 2)

An electrocardiogram (ECG) should be performed in all patients with a serum K > 6 mmol/L and in all patients who are symptomatic, have rapid-onset hyperkalemia, or have underlying heart, liver, or kidney disease. (7) Hyperkalemia is associated with a variety of ECG changes in a dose-dependent manner. The first sign of hyperkalemia is tall, peaked T waves, usually seen when K levels are between 5.5-6.5 mmol/L. (15) Shortened QT and ST segment elevation may follow. As K rises to 7-8mmol/L or above, disappearance of P waves and QRS complex widening may develop. More severe changes can occur with levels > 8 mmol/L, including conduction blocks, ectopy, or sine wave pattern. (5) Hyperkalemia may also induce arrythmias, including sinus bradycardia, ventricular tachycardia, ventricular fibrillation, and asystole. (16) Treatment decisions should not solely be based on ECG changes as they are neither sensitive nor specific. (7) Though ECG changes may be variable, the rate of potassium rise is a greater predictor than the potassium serum level itself. For example, a patient with CKD who has chronically elevated potassium may not show the same ECG changes as a young type 1 diabetic patient who has an acute rise in serum potassium because of poor insulin compliance. (17)

Some patients who do not fit the criteria for hyperkalemic emergency and therefore do not need calcium and insulin therapy still require prompt reduction of potassium within 6-12 hours. (19) These patients include those with K > 5.5 mmol/L who have significant renal impairment (ESRD or oliguria). The preferred treatment method is hemodialysis, which can normalize potassium within four hours and should be arranged as soon as possible. Another indication for prompt potassium reduction includes patients with a K > 5.5 mmol/L who are preparing for upcoming surgery. These patients can be managed with cation exchangers and reversal of the underlying cause of hyperkalemia. (19)

Patients with chronic, mild hyperkalemia (K<5.5mmol/L) or moderate (K = 5.5-6.5mmol/L) hyperkalemia should have their potassium lowered slowly (over days to weeks). These patients often have CKD or use medications that inhibit the renin-angiotensin-aldosterone system (RAAS). (14) Treatment includes dietary modification, loop or thiazide diuretics (as they cause potassium wasting), or discontinuation of the causal drug. (7) 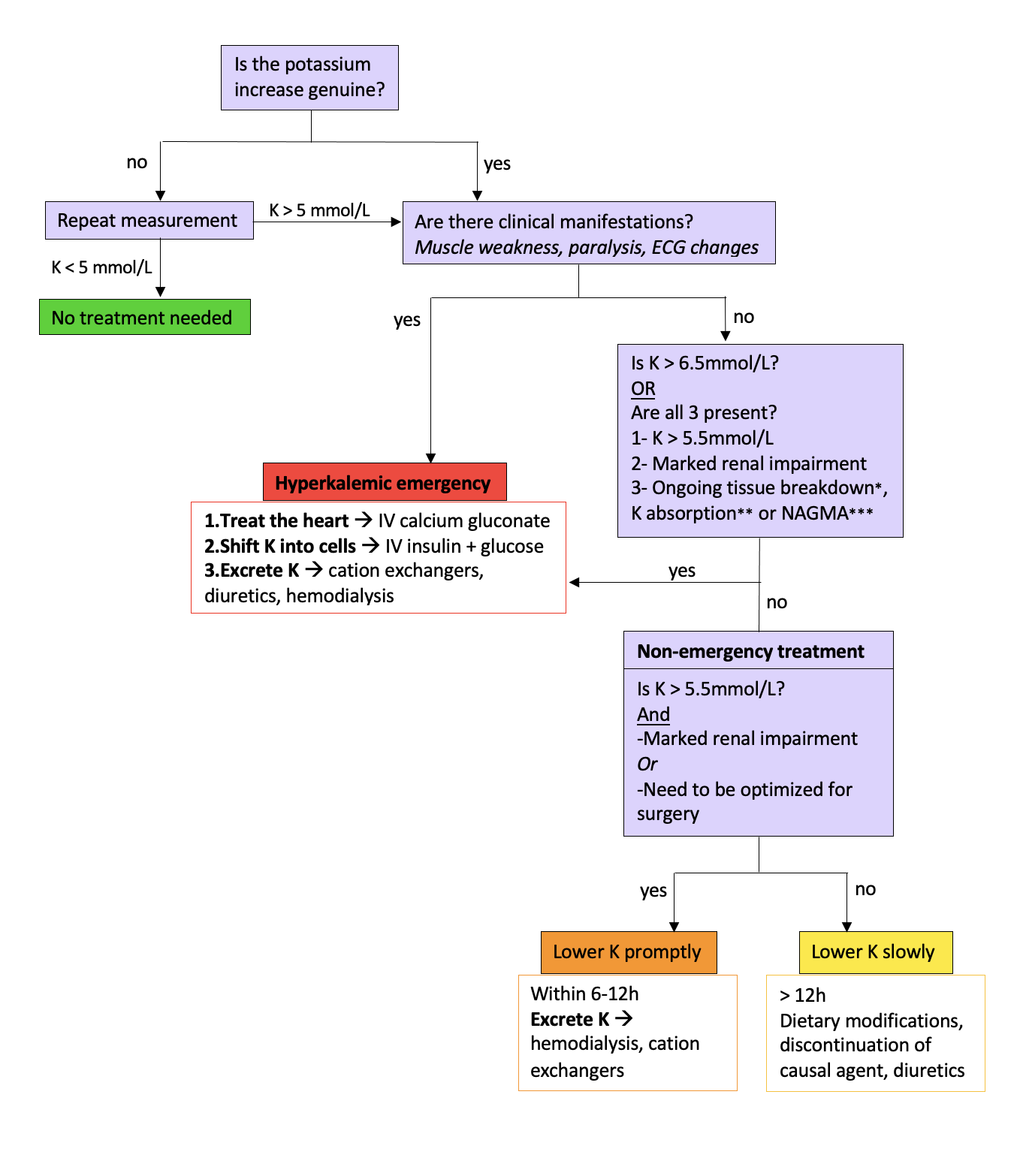 Beyond the Initial Approach

Hyperkalemia is common in patients with CKD due to renal control of potassium. Potassium affects excitable tissues, leading to cardiac abnormalities. Recent evidence suggests that in CKD patients, hyperkalemia may affect neuromuscular tissues, which are also excitable, and result in peripheral neuropathy. (14) Peripheral neuropathy affects over half of CKD patients on dialysis. Therefore, optimizing potassium control may help improve neuromuscular outcomes in this population. CKD patients are usually treated with dietary modifications and cation exchange resins. Of note, sodium zirconium cyclosilicate (SZC) and patiromer sorbitex calcium are two treatments that have recently emerged as alternatives to sodium polystyrene sulfonate (SPS), which has been used for decades despite poor clinical evidence. (20) Sodium polystyrene sulfonate (SPS) has a gritty texture and an unpleasant taste, may cause diarrhea, and in rare cases, necrosis of the colon. The two newer agents have been shown to significantly reduce serum potassium levels and have a better taste than SPS, which may facilitate adherence and improve outcomes. (2)

Hyperkalemia is one of the most common electrolyte abnormalities and is defined as a serum potassium concentration of > 5-5.5mmol/L. The main drivers of hyperkalemia are impaired intracellular potassium shifts and reduced renal potassium excretion. Hyperkalemia may be asymptomatic at lower levels but can cause potentially life-threatening cardiac arrythmias and paralysis at higher levels or when more acute. Patients with clinical manifestations, characteristic ECG changes, or serum K > 6.5 mmol/L should receive immediate treatment with IV calcium and IV insulin with glucose. Pseudohyperkalemia should always be excluded before treatment when there is no obvious cause or risk factors.